Isaac Hopkins was among the first owners/homesteaders on the property that later became known as the Hudson & Butler Ranch. The ranch is approximately 2 miles north of the county line, on highway 105, in the southern part of Douglas County. Not much is known about Mr. Hopkins, but that the ranch was owned by him and his partners in 1878. The 1880 US Census shows that Isaac was seventy years old and lived with a group of people who may or may not have been those partners. A little known fact is of a landmark on the property which is called Hopkins’ Chimney. This rock formation is now surrounded and almost hidden by the pine trees.

Algernon Hudson and Henry R. Butler were cousins who went into a ranching partnership after 1888. This is when Henry first came to Colorado, in poor health, after retiring from the British army. This hospitable team gave parties and picnics, starting in approximately 1891 when they held a dance at their new residence near Palmer Lake. The dance was followed by a fancy dress ball in March of 1893, but they soon got down to the cattle business.

The firm of Hudson & Butler ran a ranch which raised cattle from July of 1891 through September of 1896. They also were reported as having a very fine and one of the best-equipped dairies in the county with 40 milk cows. In 1893 a short tour of ranches in the southern part of the county showed that Hudson & Butler had 700 acres of land (which was purchased from Mr. Hopkins) on the range and in the nearby mountains of the eastern Rampart Range. The ranch grew a wide variety of crops and had a newly-built dairy house with a churn run by water power. There was also a new milk separator and a fish pond filled with trout.

In 1895, the June 26th issue of the Castle Rock Journal reported:

“Hudson and Butler… are thoroughly equipped for dairying and continue to ship the products of their excellent dairy with the regularity that speaks of past, present and future success.”

But soon things changed. In April of 1895 Henry married, Miss Emma Nash of New York and it was in June of that same year that the dissolution of their partnership was announced.

“Notice is herby given that the firm of Hudson & Butler is this day dissolved by mutual consent, A. Hudson retiring. The business will be carried on in the future by H. R. Butler who assumes all indebtedness and is hereby authorized to collect all debts owing to the late firm.”

About a year later it was reported that the ranch had been sold.

Butler Canyon was named for Henry Butler. It is on the west side of highway 105, almost directly west of Spruce Mountain with Cook Creek running through it. The county papers of 1916 through 1923 spoke of area people using the canyon for outings, picnics, hunting trips, fishing trips and hikes.

The flood of 1965 did some damage to this property and the ranch buildings. 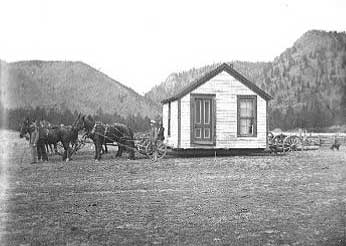 Moving a Building on the Butler Ranch

This photo was taken about 1900, of a building on the ranch being moved. The building was demolished after the 1965 flood. Note the lack of trees on the mountains in the photo background.

Thanks to the Colorado Historic Newspaper Collection, the book “Palmer Lake a Historical Narrative” , BLM Records, and the U.S. Federal Census