After serving in the Army and traveling through Spring Valley on Army business, John Geiger filed a Homestead in 1876 for the NW ¼ of Section 33, Township 10 South Range 66 West. The original homestead site was flooded so the first house, a cabin, was moved to higher ground where a newer frame house still serves as the family home. Today the Geiger family is continuing to run cattle with fifth generation George Geiger managing the ranch with his father Mike Geiger.

The original homestead was equipped with a blacksmith shop, a smoke house, an ice house, a grist mill and a hay barn with horse stables. The Geigers had an orchard and berry garden and supplied the community with fresh produce.

The original Geiger brand was UP, but the Union Pacific Railroad made John Geiger discontinue its use. He introduced Shorthorn Cattle to the Divide area.

John Geiger was also a carpenter by trade and was responsible for building many of Douglas County’s wooden bridges with high sides. He also built the Spring Valley School and served as county commissioner. He was a Divide Grange organizer and his brother Jacob eventually owned and ran the Spring Valley Store (Grange Store).

Land patents became available in Florida around 1913 for Civil War veterans. Taking advantage of this offer, John Geiger moved to Florida to operate a fruit orchard there until his death in 1927.

Fred Geiger eventually took over the family ranch from his father John and then Fred’s son, Richard, took the reins. Richard passed away March 1, 2003 and now son Mike and grandson George are raising cattle and cutting hay. 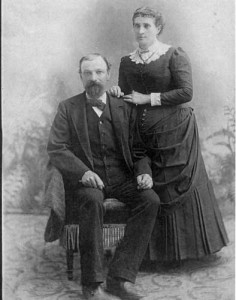 John & Anna Geiger 1900. This photo was taken in Fort Atkinson, Wisconsin, in the photo studio of Mrs. E. C. Frissell. 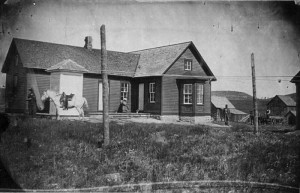 The Geiger’s ranch house is still in use as the Geiger’s home, attesting to the quality building methods of the time. All the names aren’t known, but can you find four people in this photo?

Thanks to the book, “Our Heritage the People of Douglas County”.