The 1900 Castle Rock Journal article that called Fred Likes a pioneer, also said that it was in the early 1870s that he proved up his homestead which came to be known as the Carr Lamb Ranch. Mr. Likes, it turned out, sold his property to Mr. John A. Kountz and moved to the mining town of Leadville in Lake County, Colorado. The property was south of Perry Park off of Perry park road and south of Perry Park Avenue

Mr. Koontz or Kountz, as his name was sometimes spelled, also had property at the entrance to Perry Park or Pleasant Park, famous for the haystack-like rock formations, called the Haystack Ranch. He was a pioneer in the area coming to the county in 1859 or 1860. John Koontz raised working and beef cattle; he was a grange member and helped to organize them. In politics he was a Republican. According to the 1879 census Mary was John’s wife and they had one son named Samuel. After selling his land to Carr Lamb the Koontz family moved to Aztec, New Mexico.

Carr Lamb, a cowboy, was called the “tall sycamore of Cook Creek”. He did work around Greenland and worked rounding up calves for the Bay State Cattle Company, an outfit out of Nebraska. Both born in Indiana, Carr Lamb and Anna Noe married in 1892 in Greenland. The Castle Rock Journal of May 25th reported the following “A very pretty wedding was celebrated Saturday evening at the residence of Mr. I. J. Noe, Greenland. The bride was beautifully dressed in white silk with lace trimmings, bridal veil of tulle and white rose buds. Mr. Lamb was dressed with his usual neatness, and looked his best. After the ceremony the guests were invited to partake of an elaborate entertainment. Mr. and Mrs. Lamb left on the late train for a short trip…” 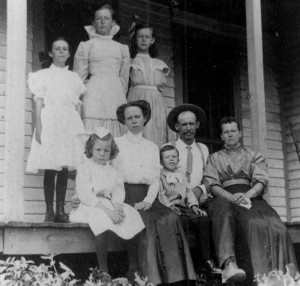 This photo of the Carr Lamb family was taken about 1905 on the porch of the family home and they are front row (L -R) Jennie, Gertrude, Fred, Mr. Carr Lamb, Mrs. Ann Lamb. Back row; Hildred, Grace and Helen.

Soon this couple set up their own home in the Perry Park area and had seven children. After some years they purchased a 400 acre ranch and built their own home, which is still used to this day. The ranch was farmed and was run as a dairy ranch. The Lamb’s acreage grew to 720 over the years. Carr registered his L/L brand in 1884. 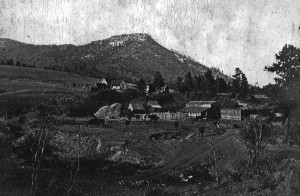 Photo of the Lamb ranch was taken cira 1900. The house is on a hill above the barns to the left of center. notice the cows and Raspberry Butte. 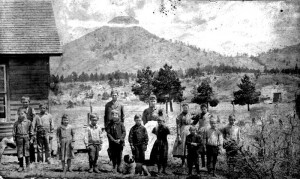 Here we see a corner of the first school in the Larkspur area, photo circa 1900. The school was built in 1884 and moved with the use of skids in 1890 into the village of Larkspur. The names of these children are not known.

Carr had other interests in the county and served in 1898 as an alternate delegate in the Republican convention. Two separate terms as county commissioner, 1900 – 1904 & 1908 – 1912, had Carr out and about among the people of the County. He was highly respected as this October 23, 1908 article tells us, “Vote early but not too often. Our Candidates – The Republican party of Douglas County is peculiarly fortunate in being able to put up a ticket which is so strong because of the personal character of its candidates. Our Democratic friends will find consolation in their defeat, in the fact that their opponents were men of such high grade. CARR LAMB – We wonder if it is any fun to run a race all alone. Our candidate for commissioner for the 2nd district has no opposition. We presume he is not complaining much, but perhaps way down in his heart he wishes there were another candidate just for the fun of the thing. However, it is no small tribute to Mr. Lamb’s standing and popularity that no one cared to enter the race against him.” 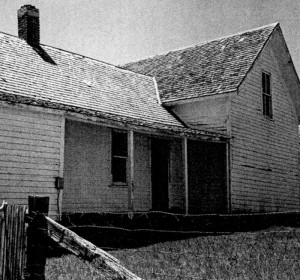 This modern day photo of the Lamb house shows the porch where the family had their picture taken. The house was built around 1900.

The newspapers also tell us that after an illness of four months Anna Lamb passed away in 1918. Seventeen years later, in 1935, Carr also passed. Their daughter Hildred and her husband Jack Warwich continued to live on the ranch. In 1947 it was Carr’s youngest daughter, Jenny, and her husband Harold Best who kept the ranch going operating it as a dairy farm.

Thanks to the Colorado Historic Newspaper Collection, U.S. Census, the book “Our Heritage the People of Douglas County, Betty Prince and Ida May Noe History Collection.