Ranch Robinson and Tucker Circa ~ 1874 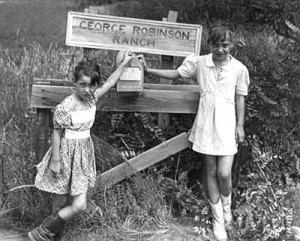 To come across the country from Chicago is hard enough, but in 1874, Elizabeth Robinson did just that in a covered wagon with her two sons; Skyler age 14 and George age 11. Elizabeth settled in the Glen Grove area outside of Perry Park. It was said that she liked the area because there was a quarry, a dormitory for the men who worked in the quarry, and a school for her boys to attend; there was also a blacksmith shop and a cook shack. 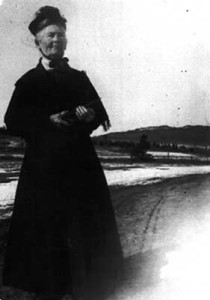 Skyler and George attended the Glen Grove School, which originally sat just south of the ranch that was operated by Elizabeth. This school later moved a couple of times before it settled on the land around the Quick ranch.

Elizabeth’s ranch was opposite the entryway to the Perry Park ranch and her house was said to be used as a hotel as well as the post office until the post office closed in 1877. Her house was a halfway point between the stage routes from Denver to Colorado City. Her barn was used to rest the stagecoach horses and provide a change of horses.

In 1881, Elizabeth purchased land north of Perry Park, some 80 acres and in 1887, she proved up on her land of 80 acres across from the Perry Park entrance. In 1889, she purchased an additional 160 acres and then again purchased another 80 acres in 1897. Elizabeth worked as a midwife and substituted for the doctor many times. She raised English Shorthorn cattle and chickens. In 1902 she started leasing her ranch, first to a Mr. Weekley and then to Lee Barrett in 1903. In 1904, Elizabeth died in Boulder where she was living.

George remained in Douglas County his entire life. His first job was to help round up cattle for neighboring ranchers, and he also drove a wagon delivering hay. Later he worked at the quarry delivering the sought after red rocks of Perry Park, delivering wagonloads to the train depot in Larkspur. In 1885, George purchased his first 40 acres when he was twenty-two years old. The land was close to where his mother made her first purchase. In 1888, George purchased an additional forty acres where he farmed and raised cattle. This land was adjacent to his mother’s property on 105 across from the entrance to Perry Park Ranch. George’s business of moving the red rocks, from the quarry to Larkspur, turned into his brother and his going into business and it seems that they may have purchased the Perry Park Stucco & Plaster Company in or around 1894. This was when George built a lime kiln on his ranch and it was reported that the Robinson brothers acquired the extensive lime deposits in Perry Park. The stucco and plaster that was made from the Perry Park Lime was known for its ability to withstand cold weather and this attribute made it a profitable commodity, which was shipped to the eastern United States.

The cattle that George raised were claimed top price of $70.99 per head in 1912, and were bought for the purpose of showing them at the Denver Stock Show. The prices paid for the cattle at the time was said to be above that of what was being paid in Denver and spoke highly of the quality that George was achieving. In 1913 George was touted in the paper as being a wealthy cattleman of Douglas County, it was at this time that Earl Tucker came to work for George.

George remained a bachelor his entire life. He was said to be a considerate man who was thoughtful and kind and that he financially helped many people in the county. In 1946, George died, at the age of eighty-three; he is buried in the Bear Canon cemetery. In 1946, Earl Tucker purchased the Robinson land and he also inherited some property from George.

Earl Tucker was born in September of 1886 in Butler County, Ohio. At eighteen years of age, he left the family home to go west and worked on ranches in Montana and Wyoming. He traveled on foot from Wyoming to Douglas County in 1908. On October 15, 1913, he married Elsie Palm, daughter of Charles and Anna Palm. Charles Palm had a ranch in Perry Park. The young couple’s first home was on the Quick ranch, at the time owned by Ben Skelton. Later he was hired on at the George Robinson ranch. 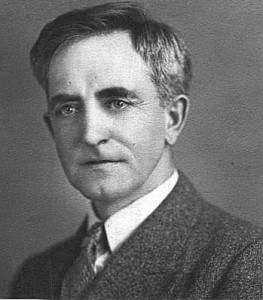 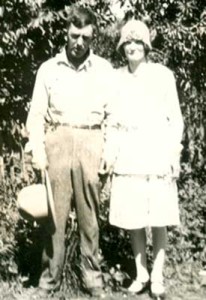