Among the pioneers who came to Colorado and settled in Douglas County was Marcus Linzy James.  He came first to Pikes Peak with a friend on a mining expedition in 1860. He stayed there two or three years and then returned to his home in Quincy, Illinois.  In 1863 he and his wife, Margaret, son John and daughters, Alice and Pearl, in company with another family crossed the plains in a prairie-schooner drawn by two oxen teams.

Mr. James wife and youngest daughter, Pearl, were not well and he was bringing them West for their health.  His wife suffered from asthma and Pearl, who had never been very strong, was not expected to live until the journey was over, however, the change was a benefit and she grew much better.

There were many Indians in those days, who frequently attacked people that were traveling across the plains.  Consequently, they were held at certain points until there were enough schooners to form a caravan or wagon train.  On account of his wife and daughter, Mr. James did not wish to travel as fast as the wagon trains.  After leaving each of the places where they were to be put in trains he traveled more slowly until he reached the next station where he was again held.

Whenever they came across Indians they were very friendly with them.  Mr. James always made the children shake hands with them and his wife baked biscuits for them in the little sheet metal stove.  The Indians were very fond of these and it was a common occurrence for them to come at meal time.  They would never eat anything until the white children ate some.  They were very suspicious and were afraid of being poisoned.

Alice, the older of the girls had beautiful auburn hair, very heavy, thick and glossy.  Whenever the Indians saw her they tried to buy or trade for her.  At one time Mr. James was offered one hundred ponies for her, as a woman with red hair was supposed to bring luck to the Indians.  For this reason she was always guarded very carefully as they feared she would be kidnapped.

Finally on October thirteenth in the year of eighteen hundred and sixty three, after many hardships and eight weeks of travel, they arrived at the little settlement where Denver is now situated.  At that time there were hardly a dozen houses.  They stayed there until the spring of eighteen hundred and sixty four, then journeyed on to what is now part of  the Radcliffe ranch on West Plum Creek about thirty-five miles south of Denver.

Mr. James built a small log cabin in which they lived.  There was no lumber in that part of the country at that time and he had to cut and hew the logs with which to build.  While these made a rough cabin, both inside and out, it was very warm and comfortable.  Their beds were nailed in the corner and had straw for mattresses.  Food and clothing were very expensive.  Flour was ten dollars a sack and calico, the very commonest of cotton cloth, was one dollar a yard.

There was plenty of fish and wild game such as, deer, antelope, buffalo and elk, which were used fresh in the winter and were smoked for summer use.  Smoked buffalo meat was known as “jerky”, and was said to be very much like our chipped beef.  There was also plenty of small game, grouse, prairie chicken, quail and rabbits.

Most of the early settlers raised their own vegetables and potatoes.  They did very little farming but raised cattle, which grazed on the plenteous grass the year around.  In the winter considerable time was spent hunting and trapping.  The furs and hides were hauled to Denver and traded for food and clothing.  Deer and buffalo were also dressed and sold or traded much the same as cattle and sheep in the present day.  Wood was the only fuel to be had for they had none of our modern heating conveniences.  There were no coal mines and no railroads by which coal could be shipped in.

Little attention was paid to the styles of the time as in our present day.  Most of their clothing was made at home from buckskin and other hides.  Floor coverings consisted of buffalo robes, bear skins and braided rag rugs.

The Indians for the most part were friendly and would trade furs, meat, ponies and other similar articles for guns and ammunition or bright colored beads, cloth, and tobacco.  Tobacco was a necessity for the peace pipe. At times Indians would become hostile and cause the pioneers much trouble.  They would steal their stock and burn their homes.  The story has been told that the Indians borrowed matches from the white settlers and after riding several miles had set the prairie on fire.

On one occasion when there was fear of an Indian raid Mr. James and his family were called to the Fort which was near the present town of Franktown.  The wife of one of the neighbors staying at the home of Mr. and Mrs. James was too ill to be moved and Mrs. James refused to leave her.  Mr. James and woman’s husband stayed at the house but Mrs. James and the children were put to sleep beside the haystack and told to go the nearby creek if they heard anything in the night.  They were afraid that the Indians would set fire to the house as they very often did in those days.  Once in the night when the dogs barked quite vigorously at some prowling animal, they became very excited and instead of going to the creek as they had been told to do, they immediately returned to the house.

The Indians, as I have mentioned before, usually burned the homes, but at times they thought it more effective to damage the property beyond use.  Mr. James has often told the story of how they raided the home of one of his neighbors, who had escaped but was forced to leave many beautiful things among which were some beautiful books which in those times were very scarce.  They also left a quantity of fruit and jam which was kept in a large cupboard in the kitchen.  This way very precious, as fruit of all kinds was scarce.  The Indians, realizing that the books were valuable to the white people but no use to them, piled them all in the center of the floor and being afraid to eat the jam poured it all over the books.

A litte while after this the James family moved to what is called the McAuliffe ranch on West Plum Creek. Mr. James built a small log cabin and they lived there.  As this was a later period he began some farming and agricultural work.  He was also very much interested in politics and took an active part in them.  He was Justice of the Peace and all trials were held at his home as there was no settlement at Castle Rock.  The only settlement was a trading post called Memphis about one mile north of what is now called Castle Rock.  The post office was also stationed at his home and it was necessary for mail to be carried many miles on horseback for delivery.

Mr. and Mrs. James spent a few more years in Douglas County.  They then moved to Denver and took a great interest in watching the settlement and development of the country.  In spite of the hardships and struggles of their early pioneer life they both lived to be over eighty years old.  There is no doubt that the part these pioneers played in the civilization of this great Western land was of inestimable value to the prosperity of the country. 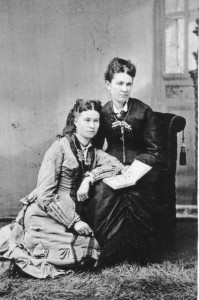