The Friday, August 14, 1903, issue of The Castle Rock Journal featured the front-page headline:  “Perry Park Visited by a Genuine Cyclone.”  Underneath was a picture of “Nanichant Inn, Perry Park, Colo.”  One hundred years ago “cyclone” and “tornado” meant the same thing—any kind of a land based circular windstorm.

Considerable damage was reported by the cyclone.  The exterior of Nanichant Inn, built in 1887, suffered when a heavy object flying through the air knocked a large hole in the side of the hotel and boards were shattered for several feet where the object struck.  Fortunately, not a pane of glass in any window was broken.

Various buildings on the grounds and tents galore were scattered in pieces of various sizes and shapes.  One of the largest tents was wrapped around the highest branches of a tall standing tree.  It “was almost a miracle that the occupants of the tents and cabin were not killed instantly by the falling trees.”   Two wooden beds in a tent were carried over 100 feet and landed—unscratched– side by side, still upright in the thick forest.  The park lost much of its beauty caused by the uprooting of many fine shade trees.

The heavy rocking chairs on the veranda of Nanichant Inn were swept away and some could not be found. Others were found several hundred yards away on the hillside, but suffered no damage.   Others lay near the Inn, “crushed into kindling.”

Injuries to persons caught in the storm were far less than might have been expected.   Five persons were hurt, but none of them fatally.  Guests from Chicago and New York, the stage driver, and the manager of the hotel suffered bruises on the head, back, chest, shoulders and arms.  A sub-headline of the article reported:  ”Numerous Narrow Escapes from Death now Seem Miraculous.”

Another sub-headline indicated: “Property Loss from the Cyclone is Quite Heavy.”   It was felt that the exact monetary loss could not be estimated but that it would be far greater than the cost of repairs.  “The hotel has sustained an injury to its reputation that will require years to repair.  Already the guests are leaving, fearing that something else dreadful may befall them while in the park.” The article further stated: “The narrow escapes of the boarders, and the freaks accomplished by the whirlwind formed the principal subjects of gossip at Perry Park….There were many narrow escapes that fall nothing short of the marvelous.” 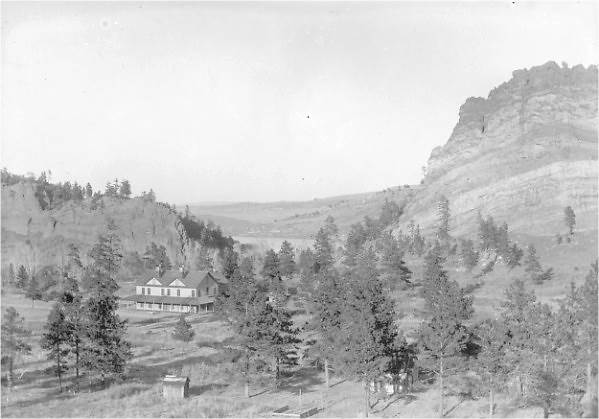