Clarence B. Frink is a member of the Carlson & Frink Creamery Company, controlling extensive dairy interests in Colorado, with branch establishments at various points. They have their headquarters at Larkspur, Douglas county, where Mr. Frink makes his home. He was born in Madison county, New York, December 12, 1878, a son of Orrelo and Etta (Pickham) Frink, natives of the state of New York. The father was interested in the creamery business in the Empire state, where he resided until 1890, when he brought his family to Colorado, settling at Fort Lupton. Clarence B. Frink spent one year in study at the Colorado State Teachers College of Greeley and one year as a student in the University of Wisconsin at Madison, where he pursued a course in agriculture and dairying. He further continued his studies along that line at Columbus Ohio, where he spent a year, and in 1902 he established a creamery at Larkspur, Colorado, and was associated with C. G. Carlson, of Denver.

At present Mr. Frink is doing business under the firm style of the Carlson & Frink CreameryCompany, with headquarters at Larkspur, Douglas county, where he has his office and the main business. He has, however, established branch creameries at various points, including Sedalia, Castle Rock and Cherry in Douglas county; Kiowa in Elbert county, and Calhan and Monument in El Paso county. He practically handles the entire milk supply in a radius of many miles. The business is done on strictly modern lines and according to the most scientific methods concerning sanitation and everything that has to do with keeping the milk clean and healthful. His establishmentsare all models of neatness, while the business methods employed commend the company to the full patronage and support of the general public. The firm of Carlson & Frink is a close corporation, all stock practically being owned by Mr. Frink and his family.

In 1902 Mr. Frink was united in marriage to Miss Ellen Cheely, a daughter of Allison and Sarah (Slate) Cheely. Mrs. Frink was born near Golden, Colorado. Her father was one of the pioneers of this state, settling near Golden at an early day. To Mr. and Mrs. Frink have been born three children: Eugene, who is in the Kemper Military School at Boonville, Missouri; and Genevieve and Robert, at home.

Fraternally Mr. Frink is a Scottish Rite Mason and Shriner and he has his blue lodge membership at Fort Lupton. He is likewise a member of the Denver Athletic Club. His political allegiance is given to the republican party, and although he is not an office seeker, he is active in framing public thought and action in regard to local politics. He owns a large, fine residence at Larkspur but removed in the winter of 1918-19 to Denver in order to give his children the better educational opportunities afforded by the city.

His course has been marked by steady progress since he made his initial step in the business world. Year by year he has progressed, wisely utilizing his opportunities, and he is today at the head of an extensive and important creamery business that covers a wide territory and has become one of the important commercial interests of the section in which he operates. 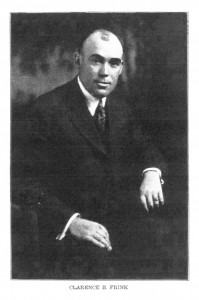 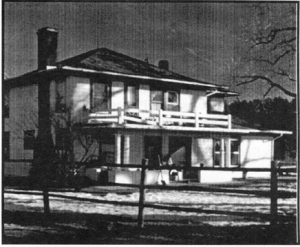 Reprinted from the History of Colorado by Wilber Fisk Stone 1919