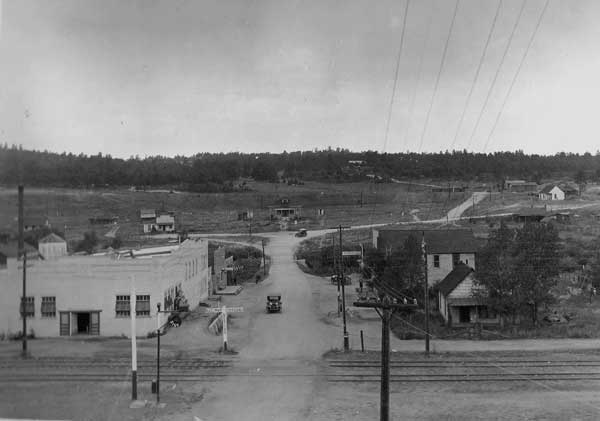 Downtown Larkspur about the same timeframe as the article, looking west. The Frink Creamery is the white building, front left.  The middle of the photo at the end of  the street is Larkspur’s one room brick schoolhouse, which today is the post office. Thanks to the American Federation of Human Rights. 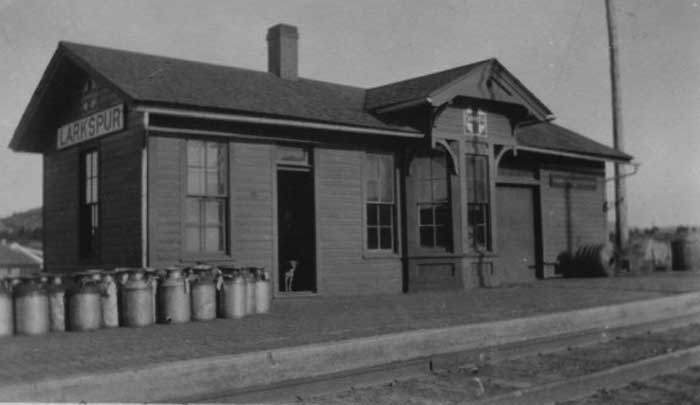 The Santa Fe Station. The backside of this building can be seen in the top photo, in the top right, just below the tree line. Thanks to Bill Noe.

Just east and west of the town are wooded slopes, covered with the native evergreen pine trees and in the near distance is the noble Larkspur Mountain on the east and the twin-peaked Raspberry Mountain on the west.

Our main industrial establishment is the Frink Creamery Company. At this place is located the main plant and offices of this now large creamery company, which began about 20 years ago in a small and humble way, and was built up to its present proportions largely through the personal untiring efforts and foresight of C. B. Frink.

It was here at Larkspur that Mr. Frink first established his now prosperous company, which now has plants at various points in Douglas County and also at other places in Colorado. He saw the possibility of a great dairy community being built up if properly conducted and Mr. Frink is deserving of considerable praise and the thanks of our entire county and our dairymen here do show their appreciation by patronizing his creameries and supply the large quantities of pure, rich milk that Douglas County is noted for.

The ranchers near Larkspur also produce a large number of fine beef cattle and feeders, many carloads of which are annually shipped from here and at the large stock shows at Denver, St. Joseph, Mo., and other places our cattle win notable number of prizes in competition with cattle from all over the west. Our ranchers also produce fine grain crops and wonderful alfalfa and other hay crops.

In the mountains west of Larkspur a large deposit of high grade potash has been discovered and a company has been formed of some energetic and able men, who have developed the property and built roads from the deposit to Larkspur, the shipping point, and some very high grade potash as been shipped to Denver, to their mill there to be refined. They own the old Neff brewing property in that city, having turned the brewery into a mill to do their refining. The company use up to date tractors and equipment in hauling the potash to cars at Larkspur.

North of town there is a clay deposit which has been worked for years. At present Hawn Brothers, who now work it, ship two carloads of clay to Denver, where it is made into sewer pipe and pottery.

In the west part of town known as Larkspur Heights we have what we believe is destined to be a great benefit to this community. Among the pine trees there is a company of quiet conservative, industrious people who compose the head of official building committee of the American Federation of Human Rights, a society that expect to build a printing plant for the publication of the societies literature and also to build a home for their aged members and orphans; also other improvements are contemplated.

The American Federation of Human Rights has members in different parts of the US, Canada and in Larkspur also has gained a just reputation as a health and summer resort. Many people have been benefited by spending a few months here in the summer, when the heat gets unbearable in many cities. They have come here and have been refreshed and invigorated by living here and enjoying the bracing air laden with the healthful odors of the pines.

Our people are sociable and invite others to come and live here.

Thanks to the Colorado Historic Newspaper collection & Record Journal, Dec. 16, 1921. This article was taken in part.