This historic ranch started way back in 1860 when Mr. Simeon S. Green, better known as “Sim” Green, came to the county. He worked for a while for Alexander Cameron Hunt who later became the Territorial Governor of Colorado and who had his own ranch north of where Sim Green would settle.

Mr. Green’s cattle ranch was one of those started before fencing was used and he ran a large herd over the countryside. A cattle rancher, Mr. Green later became interested in real-estate. After the sale of his ranch, he moved to Nebraska, where some of his family lived. He raised five children in Douglas County and three are buried in the Castle Rock cemetery.

In 1882 Sim Green sold his property to the company of Noble, Munson and Black which was better known as the HX Cattle Company.

By 1893 a Mr. Church owned the property and was making the papers with his new plowing techniques as part of the property was being farmed.

As early as 1900 the ranch was next being called the Babcock Ranch, also known as the Bay State Ranch. Jerome Babcock seemed to be well established on this land as he was very involved in county politics and served as a juror, grange member, and county commissioner. He attended the state Democratic Convention in 1904 and was appointed a delegate to the state convention in 1908. In 1907 it was reported that he was taking his shorthorns to the county fair. During 1916 Babcock took up the pen and started writing a series of articles called Democratic Editorials for the Record Journal.

In 1911 the Babcock’s home had burned to the ground. 1912 the Record Journal of Douglas County wrote of a house warming for the Babcock’s; “One of the most enjoyable social events of the season took place at the hospitable home of Mr. and Mrs. J. C. Babcock, of Greenland, in honor of Mr. Babcock’s birthday anniversary, and, incidentally to dedicate the commodious new house they have just had erected….. The evening was spent at cards and dancing and delicious refreshments were served at midnight.” Nearly one hundred guests, coming from Larkspur, Monument, Franktown, Palmer Lake, Castle Rock and Spring Valley, enjoyed the Babcock’s new home.

On June 21st of 1912 the Record Journal reported more construction on the Babcock Ranch. “Jerome Babcock … commenced this week the erection of a modern sanitary milk house on his ranch… It will be a great convenience in the handling of his dairy products.”

J. C. also was able to grow a remarkable crop of potatoes on his land, as many area farmers did. In 1917 the paper reported that Rupert was attending school in Castle Rock and that while he attended school, he and his mother lived at their house in town.

Eventually some of this property in the Larkspur/Greenland area was purchased by the Noe family. 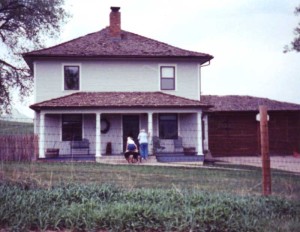 The Babcock home is on Noe Road. This relatively current photo shows a home that is much the same as when the Babcock’s lived in it. 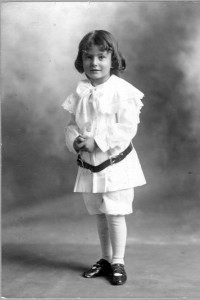 Photos courtesy of Ida May Noe, also thanks to the Colorado Historic Newspaper Collection.