The son of a much loved pioneer of Douglas County, William W. Cantril, John R. Cantril was also loved and made his own mark in the county.

The John Cantril ranch home was built in 1871 in the area of Perry Park and his neighbors, also, were well known; Peter Brennan, Upton Smith, George Nickson, George Ratcliff, John Kinner, Girth Noe, Newton Grout and Ben Quick to name a few. In 1873 John Cantril was united in marriage to Clara Quick, the daughter of Benjamin Quick.

In 1884 the Cantril’s new barn fell victim to a cyclone as it was being built, the roof had not been put on. The barn, a 49 X 30 foot structure, was lifted off its foundation and moved approximately six feet to the east of where it was under construction. The cyclone also moved about a ton of hay some sixty yards to the east. It was reported in the Castle Rock Journal that Mrs. Cantril had not noticed the wind at the house, which was near the barn. In 1901 John Cantril put an addition onto his home.

John Cantril’s ranching operation saw him putting in a reservoir in 1890 from which he could harvest ice in the winter months. He grew grains and hay and harvested the timbers on his property to be milled and shipped to the big cities.

His ranch was unusual in the fact that gypsum was found on the property. In 1895 machinery was being set up on the Cantril ranch to help work the gypsum deposits. Gypsum was being shipped from the Larkspur rail road station regularly to Denver. There was great interest in these deposits as it was said that the gypsum was of a superior quality and quantity. Gypsum was referred to as “Land Plaster” in the 1897 Castle Rock Journal. Sometime after 1895 the Perry Park Stucco & Plaster Company was organized and a kiln was constructed near the gypsum on John Cantril’s ranch.

Mr. Cantril also served as a road commissioner for the county and as early as 1894 was helping to improve the condition of the roads. He also served as a juror and election judge in Glen Grove, where he lived. His ranch also saw a tent meeting of Evangelist James Elliott, of Portland, Oregon, in 1901 & 1903. This gospel meeting also provided music and a tent that could hold 300 people. Mrs. Elliott the sister of John Cantril, she was born in Douglas County. Sometime after 1903 when their father, William Cantril, died in Oregon, Mr. and Mrs. Elliott moved to Glen Grove.

John Cantril built a new brick home, in Castle Rock, at third and Cantril streets in October of 1909. Mrs. Cantril died in 1918 and Mr. Cantril died after 1930 per U.S. Census records.

Nothing is known of the next two owners of the Cantril property, C. W. Beggs, and Henry Vogt, but that we have advertisements for the sale of their property. Anyone having more information about these ranches and their owners, who would like to help us complete this bio, please contact LHS. 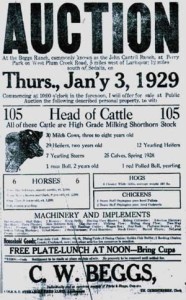